This is not the family tree - but it is about one member. Benjamin was born in 1881 and died in France in 1917 on the first day of the Battle of Arras. The details here was once on its own, much earlier, site that I did.

This new site is in memory of Benjamin, to his fellow townsmen, countrymen and others who were in or affected by the Great War.

Initially it contained some information about Benjamin, for sharing by relatives who were interested in the family history. Now it has grown a little with additional detail and a few links to relevant WW1 sites.

Thanks to all those who supplied items.

Let those who come after see to it that his name be not forgotten.

Benjamin was the youngest of the family, all born in Caithness.

Benjamin appears in the 1881 census as 2 months old at Bower.
In the 1891 census he is shown as 10 years old, still at Bower with the family.
By the 1901 census he was a flesher, residing in Wick and his parents were there as well. He possibly worked at his brother's shop, which was close by, but maybe not as he is shown as employed in own accord.
He married in 1902, and had five children. At some time he was a crofter, a carter and later was an insurance agent. He joined the Royal Defence Corps in 1915 as a volunteer, and with the Seaforth Highlanders he was posted to France in March 1917. He died on the first day of the battle of Arras, 9th April 1917 and is buried in the Highland Cemetery at Roclincourt, near Arras. One of the images shown is a sketch made on that fateful day, of the Seaforths in action. 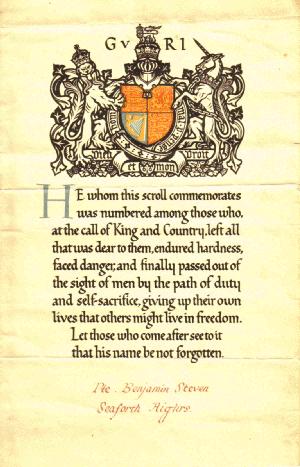 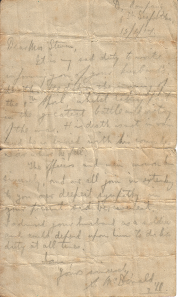 The letter shown above I thought would be better placed in the Seaforth Highlanders Museum at Fort George, Ardersier, Inverness, and they were very pleased to receive it. A larger copy is shown in Gallery6. although it is not any clearer. 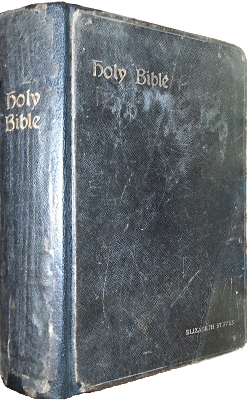 This Bible was owned by Elizabeth Steven, the mother of Benjamin. Written inside is a note Presented to Ben  in the year of his marriage...... and then also a later note listing her children.

The Bible was in the possession of her great grandson, but was in a dilapidated state (shown in Gallery3) but has been restored to a much better state as shown here.

Elizabeth was born in 1835 and it was fairly common to receive a bible on one's 21st birthday, so possible from 1856.

The links are now on the Links Page